On March 31st, Livraria Lello will inaugurate Gemma, a privileged and exclusive place for those seeking books as an investment object. Some of the world's most unique works from the library's collection will be on display.

Rare books, Manuscripts, First Editions, Luxury and Object Books, and the unique stories that add value to these works complete a new space within the World's Most Beautiful Bookstore. Gemma is a place where true literary treasures can be purchased, but it is also a unique exhibition space.

The history of Livraria Lello is also highlighted through books, catalogues, letters and other unique records, which tell the stories of a century-old brand. In the iconic neo-gothic building at 144 Rua das Carmelitas, a story is told that begins long before its opening on January 13, 1906 and continues to this day. Among the documents that materialize it, and which are now on display, stand out letters from such outstanding figures in Portuguese Literature as Camilo Castelo Branco and Eça de Queiroz.


Memories of the "last pirate bookstore in New York".

Among the novelties of this place is an exhibition that brings together part of the archives of Coimbra Editora, and Brazenhead Books, two iconic book houses, whose memory Livraria Lello do not want to let die.

After announcing, at the beginning of 2021, the acquisition of the historical collection of Coimbra Editora and Gráfica Coimbra, which closed their doors in 2020, Livraria Lello has now announced the rescue of part of the collection of the mythical Brazenhead Books, immortalized by The New York Times as the "last pirate bookstore in New York.

The bookstore, which operated in a small apartment in New York City, closed in 2019 with the death of its owner, Michael Seidenberg. In order to preserve the memory of Brazenhead Books, Livraria Lello acquired part of its assets, which it now exhibits, in a mix that reveals not only some of the most emblematic titles, but also personal and emotional objects of Michael Seidenberg.

This new room at the World's Most Beautiful Bookstore will be a living space, with its own program and whose main goal is to value books. Access to Gemma is by appointment (through this form) and subject to confirmation by Livraria Lello. Gemma will be open from Wednesday to Sunday, from 10:00 am to 7:00 pm and those who visit it will have personalized support. 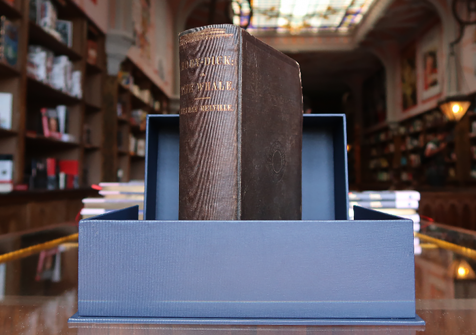