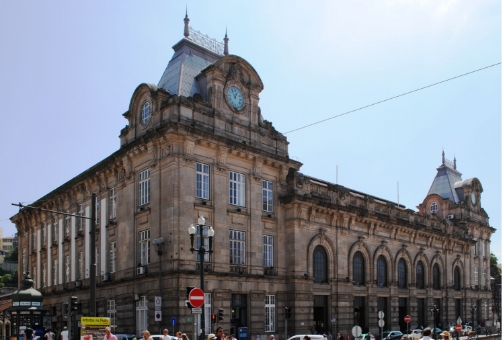 Let's embark with the words of Agustina Bessa Luís about one of the most beautiful railway stations in the world.

“The São Bento train station makes a grandiose impression like no other in Portugal. […]”,

describes the Porto author in her work As Estações da Vida (Stations of Life) (2002). Designed by the architect Marques da Silva, the S. Bento Station building enchants everyone who arrives in the city by train.

The spacious station atrium is lined with twenty thousand pictorial tiles by Jorge Colaço which are “[…] magnificent, of a truly luminous and profound Delft blue". "They tell us a whole poetry that is not epic, it is the everyday life, it is a sermon without a cassock, it is a social contract without philosophy. […]”. The colourful frieze, which runs all around the atrium, tells the story of the means of transport, and alongside scenes from Portuguese history and ethnographic representations.

The foundation stone of the S. Bento Railway Station was laid by King D. Carlos I in 1900, on the site where the old S. Bento Convent of Avé Maria used to stand, with its inauguration taking place in 1916.
In 2010, it underwent conservation and restoration work and, in 2011, was elected by Travel + Leisure magazine as one of the most beautiful railway stations in the world.