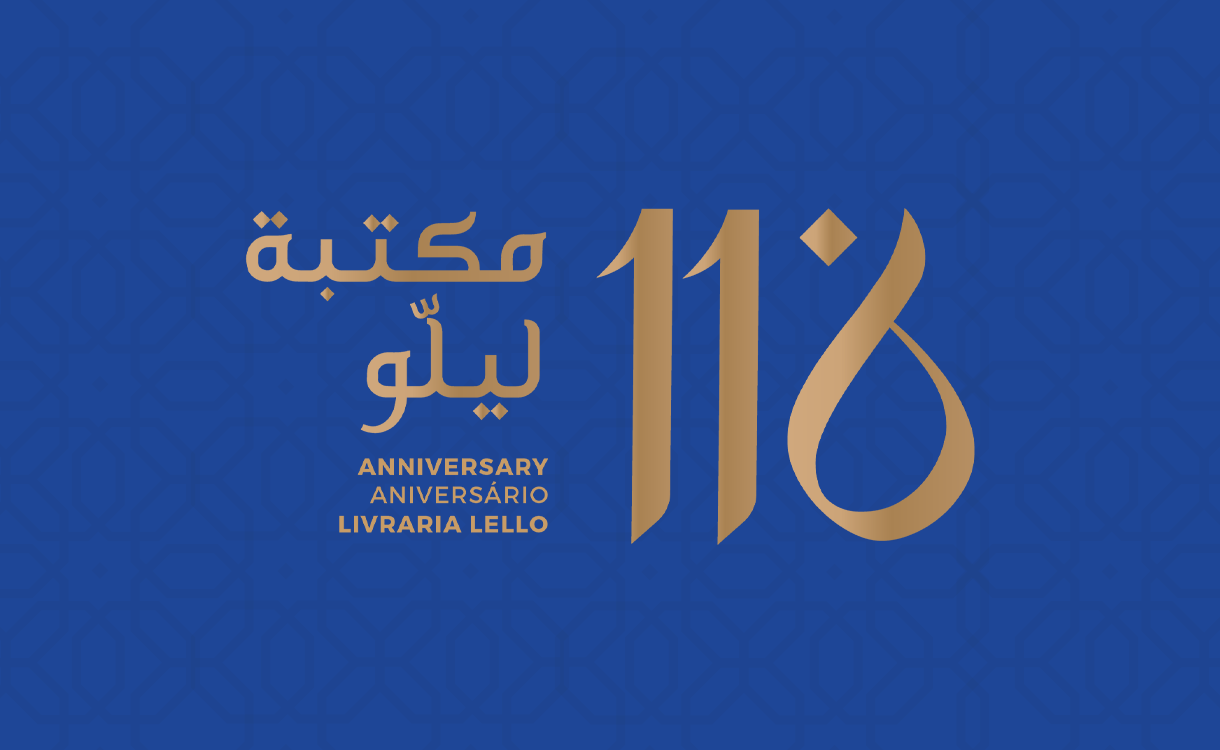 9:30 am – Launch of the first editions of Os Lusíadas and Mensagem in Arabic, live from the Portugal Pavilion at Expo Dubai 2020.

10:00 – Musical Tribute to Portuguese Literature with the participation of Ricardo Ribeiro, Tiago Bettencourt, and Joana Alegre.

10:30 am – Inauguration of the 116th Anniversary Cake of Livraria Lello – Ephemeral tile panel by the illustrator Gonçalo Viana.

10:50 am – 6:00 pm – Free admission to Livraria Lello, offering the first edition of Os Lusíadas or Mensagem in Arabic for the first 116 visitors.

Since 1906 charting new paths, on the day it celebrates its 116th anniversary, Livraria Lello shares with you the beginning of another journey. For the first time, we are also celebrating our anniversary outside our doors, on what is, in 2022, the stage where the whole world shows itself: Dubai. We are in Porto, as always, with a memorable party, open to the entire community, but also 8045 kilometers away, at the Universal Exhibition 2020, hosted by Dubai.

Because there are no borders for culture, nor for Literature, we contribute to the greater mission of taking Portugal (and Porto) to the Arab World and, from here, to the entire planet. We bring to the other side of the world, for the first time translated into Arabic, two works that, in different times, translate Portugal and the Portuguese with eternal literary mastery: Os Lusíadas and Mensagem. Stories of courage and audacity that today, as in the 16th and 20th centuries, recall the boldness of the past to inspire a future of overcoming. For at least another 116 years.

The Arabic language has around 274 million speakers, which makes it the fifth most spoken language in the world. Surprisingly, two of the greatest works of Portuguese literature, Os Lusíadas by Luís de Camões, and Mensagem by Fernando Pessoa, had never been translated into Arabic. “As exporters and promoters of Portuguese Literature and Culture, it is with great satisfaction that we contribute so that two works that portray the country and its people in such a special way reach the Arab world”, explains the administrator of Livraria Lello, Aurora Pedro Pinto.

In an ode to multiculturalism, a feature that is the perfect bridge between Livraria Lello and Dubai, the launch takes place on January 13, at the Portugal Pavilion at Expo Dubai 2020. The event, scheduled for 1:00 pm (local time) / 9:00 am (in Portugal) is promoted in partnership with AICEP Portugal Global - Agency for Investment and Foreign Trade of Portugal, with the presence of the Portuguese Commissioner for Expo Dubai, Luís Castro Henriques, the Secretary of State for Internationalization, and the Portuguese Ambassador to the United Arab Emirates. The memento marks the beginning of Portugal Day celebrations at Expo Dubai (January 14). 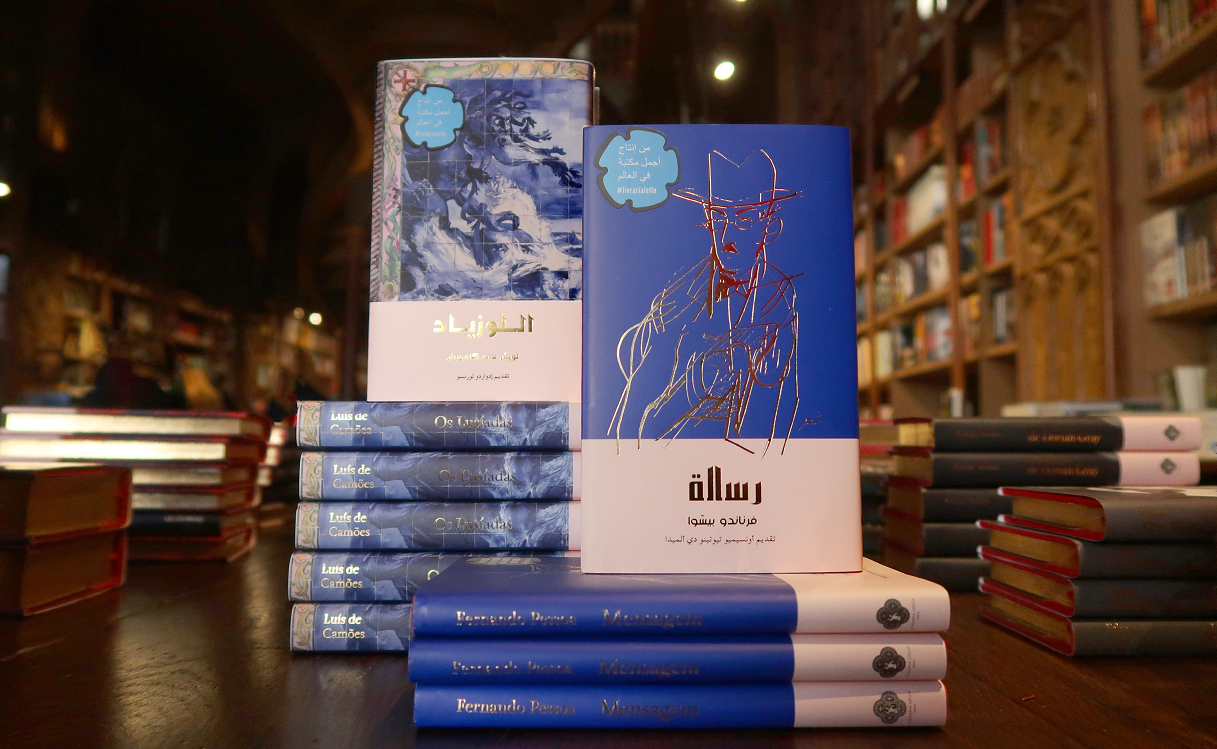 How many words does it take to tell an entire country that discovers a whole new world? Camões writes each one of them. There are 10 cantos, 1102 stanzas and 8816 verses, which build Os Lusíadas, and narrate the great epic called Portugal. And because such an epic poem cannot be held hostage by a single language, Camões is one of the Portuguese poets whose words have traveled the paths of the world over the last five centuries. We can find versions of Os Lusíadas in Spanish, Russian, French, German, Italian, Hungarian, Dutch, Japanese, Danish, Swedish and even Konkani or Esperanto. Arabic was missing. It now appears, in a beautiful edition, part of Livraria Lello's collection of classics – The Collection – and launched today at Expo Dubai 2020. The translation is by Abdeljelil Larbi, professor of Arabic Literature at the University Institute of Lisbon.

Message is Fernando Pessoa's dream of Portugal. It is the only book of poems in Portuguese published during his lifetime and signed in his own name by the author. In the 44 poems of Mensagem, centuries of history are told, filled with glories, heroes, and myths. Just as Camões had done four hundred years earlier, the poet looks at the grandeur of sea voyages as an incitement to dream and action: “It's Time!”, he writes in the last verse. Driven by the dream of making Portugal known to the whole world, through books and Literature, Livraria Lello launches the first ever edition of Message translated into Arabic. The work is part of the collection of classics from the Most Beautiful Bookstore in the World and was translated by Abdeljelil Larbi, professor of Arabic Literature at the University Institute of Lisbon. "It's the time!" Today, in Dubai and Porto, the world is celebrated.

Ricardo Ribeiro was born in Lisbon. He started singing among friends and made his public debut at just 12 years old, at Académica da Ajuda. In 2005, he received the Male Revelation award from the Amália Rodrigues Foundation. In 2006, Casa da Imprensa awarded him its revelation award. The fado singer attracted the attention of international critics when, in 2008, he collaborated on the album “Em Português” by lute player Rabih Abou Khalil, edited by Enja Records. The album “Em Português” was elected one of the 10 best albums “Top of the World” by the British magazine “Songlines” which refers to Ricardo Ribeiro as “...the rising star of Lisbon Fado”. The Amália Foundation once again distinguished Ricardo Ribeiro, in 2011, this time with the Best Interpreter award. On January 27, 2015, he received, from the hands of the President of the Republic, Cavaco Silva, the Commendation of the Order of Infante D. Henrique. Out of doors, Ricardo Ribeiro is nominated for the category of Best Artist of 2015 by the British magazine Songlines, in a vote entirely decided by the public. He was awarded the Carlos Paredes'17 Prize in ex-aequo with the group Quarteto Artemsax & Lino Guerreiro, awarded by the Vila Franca de Xira City Council and received a mention in the José Afonso Prize 2017 also with his latest album. In April 2019, he launches, with Jarrod Cagwin and João Paulo Esteves da Silva, his new work “Respeitosa Mente” (2019).

Joana Alegre was born in 1985, in Lisbon, and music has always been part of her life, having a vast musical training, having started by studying guitar at Academia Duarte Costa and later on voice, guitar and complementary piano at Hot Clube de Portugal. , having also taken a summer course at the New School For Jazz And Contemporary Music, in New York. In February 2008, he came in 4th place in the Billboard World Songwriting Contest, with the song Tribute To M, performed by Joana Melo, and in 2010 he was part of the Best Combo, which was awarded at the Jazz Festival at Teatro São Luiz, in Lisbon. In 2011, he released his first album of originals, entitled The Pulse. In 2019, in addition to being a semifinalist in the International Songwriting Competition, with the theme Vast, she participated in The Voice Portugal program, where she snatched everything and everyone with her blind test, where she played Jenny Of Old Stones, by Florence + The Machine. Finished in third place. You will now be preparing your next album. In parallel with her musical career, Joana Alegre has a degree in Political Science and International Relations, and a master's degree in Communication, Culture, and Information Technologies, and since 2017 she has been an independent deputy in the Municipal Assembly of Lisbon, having been elected by the Citizens' Movement for Lisbon.

Author of several reference compositions of new Portuguese music, and always in Portuguese, it was in 2003 that he embarked on what would be his first studio adventure, with Toranja, forever marking the Portuguese music scene. In 2006, Toranja announced an extended break, and it was then that Tiago Bettencourt left for Canada and with Mantha as his backing band, recorded the album "Jardim". In 2010, "Em Fuga" is published. At the end of 2011, "Tiago na Toca e os Poetas" is published. Palma, and equipped with the best moments of an exemplary career, marks a decade of many experiences and revealing successes of one of the greatest national voices and one of the great authors of his generation. In 2014, Tiago Bettencourt presents the new album “Do Principio.” 2017 is marked by the release of his new album “A Procura” which reflects throughout its 11 songs this incessant search of the artist for the various musical quadrants’ characteristic of his own and even beyond. On October 30, 2020, Tiago Bettencourt launches the long-awaited new album of originals – “2019 Rumo ao Eclipse”, the seventh of his career.”.


Inauguration of a new artistic installation in the show windows

“Livraria Lello: a cultural Stopover” was the starting point for the artistic installation that marks the 116th anniversary of Livraria Lello, signed by Atelier Caviar from Porto. Thus, on the one hand, we have the object on which Livraria Lello's entire activity is centered: the Book. On the other hand, the export of culture through books, from Livraria Lello to the World, is represented. These windows reflect not only the desire for internationalization and the multicultural character of Livraria Lello, but also its main mission: to make the whole world read.

A sweet and ephemeral work of art with illustrations by the award-winning Portuguese illustrator Gonçalo Viana and oriental flavors combined by the mastery of Chocolatitude – artisanal chocolate. The interpretation of the facade of Livraria Lello in tile, a common element of the Arab and Portuguese imaginations, symbolizes the multiculturalism that is celebrated daily at the Most Beautiful Bookstore in the World.